Following on from the previous posts, we've reached the midpoint of the David Gemmell Morningstar coverage. There's no going back now! But that's not to say that this next author is of middle-ground mention, not in the least. I read Luke Scull's debut 'The Grim Company' when it was released last year, and I have reread it in anticipation for the awards. For a debut its damn good, and even on my second run through I found myself caught up in the adrenaline written in between the lines. So, let's hear Luke's side of it...
Hi Luke, welcome to WWaS (Written With a Sword). Congratulations for being nominated to the shortlist in the David Gemmell Morningstar Award. For those readers who have yet to ‘meet you’, tell us a little about yourself.


I'm a video game designer turned novelist. I'm in my early 30s and currently living in the south west of England, which in recent years has become a safe haven for my kind. When I'm not writing fantasy novels or designing fantasy games, I'm reading fantasy novels or playing fantasy games. Occasionally I venture outside to hurl weights around a gym and exchange manly nods and the occasional chest slap with the largely middle-aged women and OAPs who frequent the local sport centre.

So, how did you go from video game designer to writer? Have you always wanted to be a writer?


I've always been interested in narrative of one kind or another, starting with the LARP scenarios I would create for my brother when we were children. I would place needles in the carpet and make him walk over them, before battering him with my broadsword +5/plastic vacuum attachment accessory. The journey to Mount Doom was a veritable walk in the park compared with making it through one of my games.


I've been a video game writer for about 10 years. I wanted to see if my skills could transition to writing a novel. The Grim Company was originally intended as a practice run for a serious attempt at a book some time in the future. I guess things went better than expected.


With a second name so close to ‘skull’ it’s little surprise that you went for the grittier, and excuse the second pun, ‘grim’ side of fantasy. Was this something you had planned for, or did the story darken/realise of its own accord?


aving such a grimdark-friendly name was obviously fate at work. The only other avenue open to me was Olympic rower, and even with my prodigious physical gifts I'm not certain I'd have improved Team GB that much.


When I began writing The Grim Company I was already working on a teen-rated fantasy CRPG set in a pseudo middle-eastern fantasy world. I had to make the two projects very different, to avoid feelings of repetition or crossover. With my gaming project taking place in an "exotic" setting, I decided to go in the other direction with the novel and play with some familiar tropes whilst embracing an edgier tone. 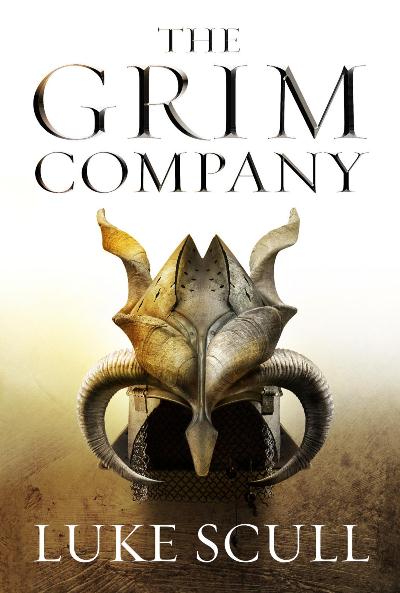 Seeing as we’ve mentioned ‘The Grim Company’ tell us more, but in 50 words or less – what’s your ‘elevator pitch’?

The Grim Company is an epic fantasy about a group of anti-heroes set in a world of long-dead gods, rampaging demons, and immortal tyrants. Among fantasy novels written by white men living within 10 miles of Warminster, it has few peers.


How long did it take to plan and write ‘The Grim Company’? Do you have a writing routine?


The book took me around 10 months to write in haphazard fashion. I don't really have a routine. I tend to think and edit during the day, and write at night when I'm feeling more creatively inspired – possibly spurred on by guilt at having wasted yet another day Googling myself, brooding over some negative review that happened three weeks ago, and answering the door to the postman dressed only in my underpants.

What inspired you to write ‘The Grim Company’?


Free time and a desire to see if I could write a book. When my now-agent e-mailed me after reading the first 12 chapters or so online, I knew I had to finish the story. Writers are supposed to approach agents and face years of rejection before someone eventually says yes – yet here I was being invited to London having made no effort at all to get published.

Now that ‘The Grim Company’ has been released into the wild, are you happy with it? Anything you’d change?


Yes and yes. I have somewhat mixed feelings. I suspect this is not uncommon.


On one hand, The Grim Company went to auction with half a dozen publishers bidding, got some nice advances and great reviews, and made it to the shortlist for the David Gemmell Morningstar Award. It's also been translated into eight languages as of this interview.


On the other hand… it's pretty much the first draft of the first novel I ever attempted. It's me at about 50% of my potential. It's very good in parts; a little raw and perhaps not strikingly original in others, as befits both my lack of experience and my original intent of simply writing for my own amusement before things got serious. I dare say that in five years I'll look back and frown darkly at certain things. I could rewrite it as a significantly better novel right now, with the experience I've gained between books one and two.


Still. To moan that my first book is merely good but flawed, and not one of the many, ahem, masterpieces I will no doubt write in time, would be churlish. I've been very lucky in so many ways.

What was the hardest part of writing ‘The Grim Company’?


Realising just how much rewriting needed to be done on a sentence level to improve my early prose. As a game designer, the plotting and structural sides of writing a book came naturally – even the dialogue, after a shaky start. But bringing my prose up to standard was a lengthier process, as I simply hadn't done anything like that before.


The story follows multiple major characters including narcissistic rebel Davarus Cole, barbarians Brodar Kayne and Jerek the Wolf, Yllandris the power hungry sorceress, loyal and honourable Barandas sworn to Magelord Salazar, and Emerul the legless Half-mage. Which are you most like?
I'm a combination of Cole's lack of awareness, Jerek's black temper and intolerance, Eremul's bitterness and cynicism, and Kayne's age-related physical afflictions. Needless to say, my wife is a very lucky woman.


What would you like readers to take away from ‘The Grim Company’?


A fervent desire to pre-order the second in the trilogy as soon as possible. That, and to be entertained. Maybe even chortle a few times.

What does it mean to you to being nominated for the David Gemmell Morningstar award?


I'm not generally a big believer in awards. All that really matters are sales figures. They're the most honest way of measuring whether or not you are succeeding as a writer. Some people will hate me for saying that, but there it is.


The Gemmells are an exception to my award apathy. I approve of the public vote, which for its many failings is still infinitely preferable to, for example, cliques manipulating award nominations in yet another proxy for America's endless culture war (sorry Americans: I love you guys, really). I approve of the fact the Gemmells help commemorate a great man and author. That enough people voted for The Grim Company to propel it to the shortlist warms the ashes of what I once called a heart.


70,000 votes cast is phenomenal – long may the Gemmells continue to grow.


David Gemmell is regarded as the ‘big daddy’ of modern British heroic-fantasy. Who is your hero?


I don't have a hero per se. Instead I'm going to name my biggest influences: Tolkien, Martin, Pratchett, and Joe Abercrombie, the last of whom I'm often compared to, though tonally and stylistically I've been writing in a very similar way for many years. Here's a quote someone wrote about my early games, released between 2002-2006:


"They're frankly kind of a downer. The very first subquest has you investigating the horrific death of a tavern maid at the hands of her abusive boyfriend. Friendly NPCs die (and kill each other) in droves, bad guys win and everyone and their dog are either dying of cancer or have been abused as children or something. It's all a bit grim and joyless."


So there you go.

What can we expect next from you?


My second novel, Sword of the North, should be out early next year, and will hopefully be a much stronger and more innovative novel than the first. Dead Man's Steel will likely follow in 2016.


After The Grim Company trilogy is finished, I would like to tackle some standalones, possibly in the same setting (the Age of Ruin).


I'm also considering writing outside the fantasy genre. Over the last 10 years I've worked on multiple established RPG franchises, designed a new CRPG setting, and written two fantasy novels in the Age of Ruin, with a third to follow. That's a lot of time spent in secondary worlds. The prospect of working with the real world for a change is enticing. (Go somewhere exotic! Conduct on-site research! Interviews!) I have one or two ideas in mind…


Do you read other books in your own genre? Who is your favourite author?


I try to read broadly within the genre. I have 40 books on my 2014 Goodreads challenge, including some of my fellow finalists' books that I own on kindle. If I don't win the Morningstar award, I'm getting them refunded.


I have a few favourites. Martin, of course. Abercrombie. The usual neckbeard suspects. I'm also a big fan of Mark Lawrence, who is both a great (and horrifyingly fast!) writer and a very nice guy. Daniel Polansky is an undiscovered gem of an author: I predict that in a few years he'll be getting the same recognition Matthew Woodring Stover is receiving now in various "Name me an underrated author" forum threads.


Be humble. Accept criticism and advice from folk better qualified than you until the moment you're certain you've learned enough that you can safely ignore it. Find readers you trust.
Posted by Unknown at 13:35